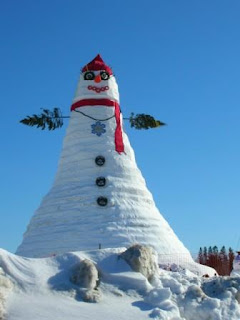 Fondly named 'Olympia Snow' after our senator Olympia Snowe, the world's tallest snowwoman was dedicated at a ceremony on Friday, February 29, 2008. The impressive snowwoman was built with the efforts of the townspeople of Bethel, Maine.

Schoolchildren painted the 8' long 'carrot' nose and helped put together the hat and scarf that adorn Olympia. Her arms are decorated, 27' tall (long at this point) evergreens. Those gorgeous red lips are painted tractor tires. Her stunning black eyes are also tractor tires. Ditto the au courant 'buttons' on her de monde 'dress'.
Towering over the surrounding buildings, Olympia is stunningly decked out with expressive eyelashes made from skis and a charming 6' snowflake pendant. Olympia was predated by 'Angus, King of the Mountain' in 1999. Angus topped out at 112' tall, 10 feet shorter than Olympia.
The folks of Bethel hope the folks of Guinness will open up a category for 'World's Tallest Snowwoman'. In 1999, Angus, King of the Mountain was named 'World's Tallest Snowman'. That record still stands today! With the debut of Olympia, Bethel may lay claim to the tallest family of snowpeople in the world!
It was a great drive out there today, beautiful blue skies and bearable temps around 25. If you haven't been to Maine to ski this year, come soon! There's at least an extra 3' more of snow in Bethel than there is here in Freeport, and we are nowhere near losing our snow cover anytime soon! 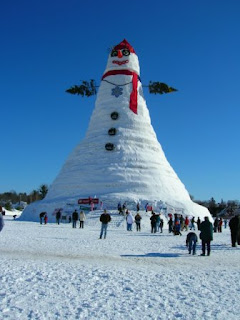 There is no fee to stop by and see Olympia (how could they charge, you can see her clear across town!) and the Chamber has a small souvenir stand set up on site. There they have t-shirts, sweatshirts, tote bags and postcards.
From here it was a drive of about 1 hour and 45 minutes. There are plenty of shops and restaurants in Bethel, so come and make a day of it! We took Rt 26 and there are lots of things to do along the way. More on that on another day.
Posted by Monica