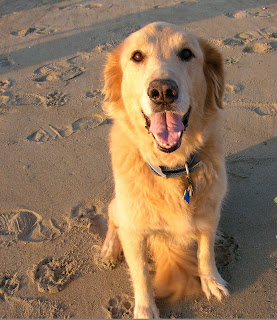 How do you say goodbye to a good friend? This was a tough week at the inn as we had to say goodbye to our best buddy, Bre. We'd had some really nice weather the past 2 weeks so we were able to take her for hikes at Winslow Park and she went for her early morning stroll with Rock over to Bow Street Market for her coffee & biscuit. But, she had a really difficult weekend and we knew it was time.

It's changing the routine that's hard. Every morning she'd be at the top of the stairs waiting to go out. Or, she'd be poking her nose under the covers to remind us it was time to get up. Then, after her breakfast she'd come over to my side of the bed and belch in my face. Always loved to share her happiness with everyone. (Asleep or not.)

After cleaning up the inn breakfast I always came over to the office to give her a leftover buttermilk biscuit or peanut butter cookie and then she'd park herself under the desk while I checked the email and phone calls and got set up for the day.

For years she followed us all over the inn, supervising our work to make sure we were doing everything right. But, the degenerative nerve disease that finally did her in stopped that about a year ago. No more trips up and down the stairs and it got too hard for her to maintain her balance on the hardwood floors.

Bre rescued us back in Vermont in 1999. We found ourselves at lost ends after my old dog, Sammie, died from cancer. A friend told me the shelter in Morrisville had a litter of 12 Golden puppies. By the time I called they were all gone. But, we drove out there in January and found Bre instead- 8 months old and looking for a better life. She was the ultimate Beta dog. Never tried to lead, always happy to just go where we were going no matter where that was.

She was the perfect dog for me. Hated the heat & humidity and liked nothing better than lounging in front of the fire on a cold, winter's day after a morning of snowshoeing. And, when we lived in Vermont, she loved going out to the general store for coffee and a donut every weekend morning with Rock.
We weren't sure how she would take to Maine, but the day we came here to look at properties we stopped at York Beach to stretch our legs. The granite stairs down to the beach were frozen solid with seaspray and she almost broke a leg racing to get to the water. She was home. Just like me.

Her favorite place in Maine was Popham Beach. When we would turn down the last stretch of 209 she would start doing the happy dance in the way back of the car. We'd walk along the beach eating oyster crackers (she'd walk backwards to be sure we didn't get more crackers than she did!) and enjoying the day.

Rock & I sat around trading stories last night. We have a million of them, some of them you've heard about: the day she ate a baker's dozen of bran muffins; how she would let my now 13 year old nephew walk up and down her back like she was a mountain he was climbing when he was 11 months old; how she would race around and around the car until you finally opened the door and then she'd jump in your lap; how she once sat looking up at Rock stranded on the roof after the ladder fell over in the wind, nothing but patience waiting for him to come down; how she liked Rock's brother, Kevin, so much it was embarrassing to watch her when he was around; snorkeling underwater in the Brown's River; walking on our snowshoes or x-c skis so she could avoid the extra work. A million memories.

Hi Monica and Rock......As frequent guests, we will miss Bre too! She was a wonderful dog (the best), and I always enjoyed seeing her at the breakfast hour....and her tricks with Rock. So sorry for your loss this week. Bre was a gift, and I hope when you are ready that you will find a new pup! Bre would want that, for sure. There is nothing like the unconditinal love of a pet. Looking forward to seeing you and Rock this coming weekend. Cheers - Cecilia

I am so sorry for your grief and loss. The death of a great dog strikes the heart extremely hard; there's no other loss quite like it, because nothing and no one has ever loved us as unconditionally as a dog has. We lost our beloved hound, Tuckerman, in late September when he was hit by a truck. He wasn't quite three years old, and we're still in immense pain over his death.

I'm so sorry to hear about the loss of such an important and special member of the family. It sounds like you gave Bre a great life, and that she gave you even more during her time with you. Thank you for sharing her stories. Hugs, Jackie.

Monica and Rock,
It saddens my heart so to hear of you losing Bre. We have over the years, lost so many loves and we still miss them all, just some of the sharp pain lightens a bit. Our Kasey is not going to be around too much longer. She had been going down hill for 3 winters now and is beginning to waste away. We take the best care of her we can and love her often She is going on 17 and we will decide later if we will get another dog. Since we have Sophie 5, and Willie 1.5, we will just wait and see if there is another buddy needing a home. WE highly recommend geting another dog, though, to help give you dogish things to do, and have another pal.
I have made a 4x6 of the picture you sent of Bre to enlarge to put with the other pictures we save of friends we especially loved. The pictures are atop the kitchen cabinets. They are all there to see any time! Truly Bre was a "Great One". Regards, Barbara and Terry.

I just saw this and want to say how grateful I am that 'Buca and I got to meet Bre in walks around Freeport. She was a wonderfully happy, exciting friend and neighbor. Thank you for bringing her to town. I'm sure that everyone between the White Cedar Inn and Bow Street market and beyond was always happy to see her. We'll all miss her.

Thank you all for your heartfelt comments!

Jack- everyone at Bow St Market gathered 'round to extend condolences when Rock showed up the first morning without her. One of the perks of living in a small town- everyone knows you cares about the passing of your dog.