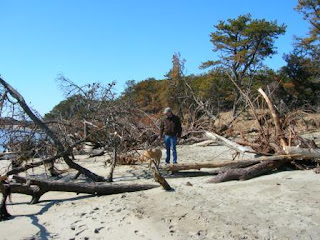 So, a couple of years ago I wrote about Popham Beach right after we returned from our annual Christmas walk on the beach. What a difference a couple of years make! After the Patriot's Day storm in April 2008, the tides turned, literally. Erosion on the beach has made it impossible to walk out to the Fox Islands unless the tide is VERY low, and even then it is not a good idea. The chance of being stuck out there is high.

This is what the beach looks like headed in a southerly direction. To compare what it looked like a couple of years ago, check the previous blog post.

What you see above USED to be the dunes. The erosion is so bad in some spots that it is at least a 10' drop from the now-closed path to the beach. Here's an example, with Flat Stanley standing in for a measuring stick. (FS is about 1' tall.) 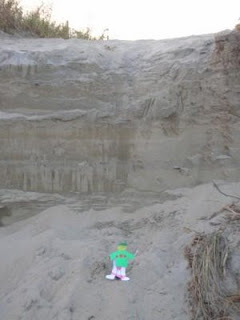 In spite of the erosion, it's still a great walk on the beach. It's better to plan your walk at low tide than around high tide. Along with the erosion, though, an interesting new beach area has been formed with lots of driftwood tossed up making some comfortable places to sit and just contemplate the placid, ever-changing, always the same ocean.

It's also a great opportunity to walk around to Fort Popham, along the Kennebec River. Something we're going to accomplish one of these days!
Posted by Monica No comments: 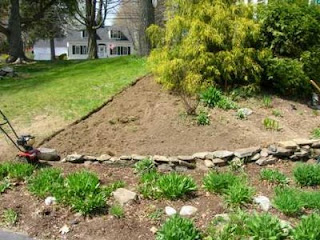 With the beautiful weather we've had the past few days and the chance of a good watering for the plants tomorrow, I was scurrying around today to get a new flower bed planned and somewhat executed.

Unfortunately, when Rock was pulling out the cotoneaster by the roots with a rope tied around the hitch on his car, I was inside talking on the phone and so missed a rare opportunity for interesting photos. Suffice it to say, the cotoneaster stopped the Buick in its tracks and the rope snapped. Luckily, it had pulled up somewhat by that time.

If you are ever tempted to plant this shrub, be forewarned, it digs in and hangs on and spreads all on its own. We're already finding 'mini me's' in random spots.

Also unfortunate is that Rock doesn't take a lot of photos unless I hand him the camera and say, 'Take a picture of me doing this,' (whatever 'this' might be) so there are no photos to be had of me running the cultivator this morning prepping the new bed. Also no pix of me edging the whole thing, either. You'll just have to wonder at what it must have looked like!

If you've been here before, you know this is the bed right by the entry stairs. It's been getting a bit overgrown and the cotoneaster is really good for catching leaves and random McD's wrappers that get tossed from cars, so it really needed to go. 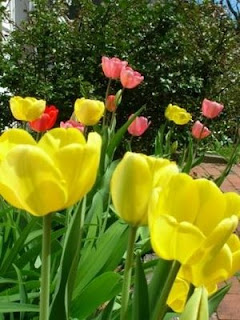 Other diggings and plantings have been happening as well. Outside the Bowdoin's back window, I planted a small bed with a shrub whose name I do not know (help appreciated when you see it) and some hostas. We moved the red dogwood away from the house and placed it in a new bed at the end of the wall where the hostas grow. And, we moved another one of those name-not-known shrubs away from the house and put it in the new bed above. (More pix are coming when the plants are in and the mulch is down.)

Where those 2 shrubs were, I hope to get in some herbs this year. It's a great, sunny location so they should take off.

OK, one last pic- our tulips which delight me by returning every year (sometimes not where I thought they would as the moles & voles move them around).
Posted by Monica No comments: 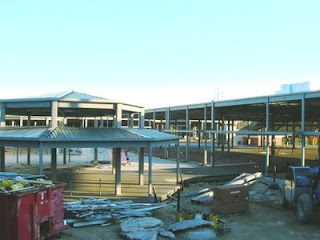 Stay up to date with what stores are coming and what events are planned by checking their website.

Joan Benoit Samuelson will be the guest of honor at the opening of the Nike Store. Stop by at noon on May 16!

Really new news is that there is also going to be a 6 screen movie theater. Wow!

I'll be taking a few more pix in a couple of days so you can see the difference between these pix and what it looks like with the sidewalks in and the walls in place. It's really starting to look neat! We had the architect staying with us a few weeks ago and he's optimistic that this will really take off as a vibrant village shopping center.

Still waiting for who the new 'big' restaurant will be.

Construction on the Freeport Village Station, the new downtown area shopping and dining center is proceeding quickly. With an opening date tentatively set for May, 2009, things are really shaping up. The parking garage on the lower level may be opening this winter!

Part of the plan, seen in the photos below is for a new restaurant on Mill Street, next to the Mallett Building (the brick building in the photos). Standing in the street to take these photos (what I won't do so you can visualize the new shopping area!) I am facing the southern end of the shopping/parking garage. Petrillos Restaurant is to the right behind the colorful insulating facade of the building.

The new shops we've heard are going in include the Van Heusen/Calvin Klein family of shops. Until contracts are signed, no other stores can be revealed...stay tuned! 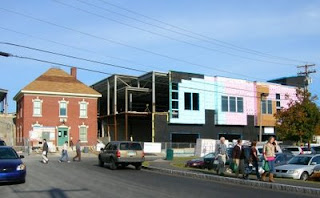 We've been talking about this for a few years now, but there will also be a train coming into Freeport in the not too distant future (2010). You'll be able to hop on the train (Amtrak Downeaster) in Boston or Rockland and head straight to downtown Freeport. We hope you'll decide there's so much to see and do here that you'll stay the night (or 2) and make a little getaway for yourself!

The Freeport Village Station is just across the street from LL Bean, so still only a short walk from White Cedar Inn. Where the new train station will be located has not yet been finalized. When it is, we'll let you know.
Posted by Monica No comments:

Fun in Freeport this weekend!

This weekend, April 17-19, is alive with outdoor activities!

The LL Bean Spring Sports event takes place this weekend. Take a walk to the store from here and get excited about the outdoors! And don't miss the newly opened 1912 Cafe located in LL Bean on the main floor near the big 'River' aquarium.

The Wild Bird Supply store will be having free coffee and popcorn as well as their free, guided bird walk. On Saturday, meet at the store at 8 AM; on Sunday meet atop Bradbury Mountain. (In the event of rain, the Sunday bird walk will not be held, but a presentation on hawk identification will be show at the store.) FMI- check their website

The Historic Freeport B&B's will be hosting an open house on Friday, April 17 from 2-4 PM. Stop in here to get your map and have a look around. This was the former home of Donald MacMillan, Arctic explorer. We have some of his books and his wife Marian's books as well as articles he wrote for National Geographic back in 1925. And that's just the tip of the iceberg! For more information and to see artifacts of his and Adm Peary's expeditions, check out the Peary-MacMillan Arctic Museum at Bowdoin College.

The Bath Antiques Show is on Sunday from 10 AM- 3 PM in the Bath Middle School.

Hope to see you here!

And plan ahead for the grand opening of the Freeport Village Station...May 16. South Freeport resident, Joan Benoit Samuelson will be the guest of honor at the opening of the Nike Outlet.
Posted by Monica No comments:

Baked brie with apples- April recipe of the month

We had something similar to this at the Blue Water Grill in Skaneateles (highly recommend this restaurant right on the lake). It was such a hit at the table, we decided to make it for breakfast as our fruit course. It would also make great hors d'oeuvres.

Slice the French bread into thin slices, place on baking sheet. Slice the brie in thin slices and place one on top of each slice of bread. Sprinkle the walnuts around the bread on the baking sheet (or bake separately if no room). Warm the raspberry jam so it 'pours' and drizzle it over the walnuts. Bake at 350 degrees just until the cheese starts to melt.

LL Bean's Discovery Park will be hosting multiple different events during the summer. So, a note to those locals who set up their chairs in June - don't! The Big Lawn will be used for many events and not just for concerts. (And a note from LL Bean- set up of chairs & blankets may be done the day before the concert, not prior to that. Thanks for the help keeping the park clear during the week!)

As always, concerts are free, but subject to cancellation due to weather. Start time: 7:30 PM.

July 4:  Events all day including the 5k road race. Parade in front of the inn at 10 AM.

Aug 18:  Teens to Trails with events throughout the day

Call for more information and event cancellations: 1-877-755-2326
All concerts start at 7:30 PM in Discovery Park at LL Bean. Saturday nights, except where noted. White Cedar Inn is 2 blocks from Discovery Park, and easy walk!

Last summer was a terrific line-up and everyone had a great time. Hope to see you this summer!

Thanks again to LL Bean for these great concerts every summer!