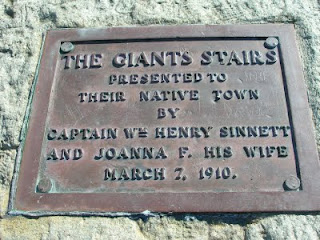 We took a little drive today out to Bailey Island to see if we could find the Giant's Stairs. Thanks to a very nice set of directions from the folks at the Harpswell Heritage Land Trust, we had no trouble at all. There is a short, shore path that loops back around to Washington Ave. This is an easy, 40-45 minute drive from White Cedar Inn. (Rt 1 to Rt 24, basically 2 right turns and 30 miles and you're there!)

If you've walked on the Marginal Way in Ogunquit, this is similar in feel, except it is a smaller and more intimate setting. The houses along Ocean Ave & Washington Ave have that very coastal feel with weathered shingles abounding. You can pick up the trail head at the end of Ocean Ave or just a short way down Washington Ave (after parking at the church). I suggest walking down to the Washington Ave access point as there are trail maps there. We didn't know we could walk farther down the trail to the harbor until we got home and looked at the map I brought home for our trail book, fondly called 'Take a Hike!'

Bre came along, as she often does, so we did not attempt to scale the stairs, as we might have done had she stayed home! (To save the excitement of seeing the stairs for yourselves, we're not posting exact pictures of them, just some surrounding scenery.) 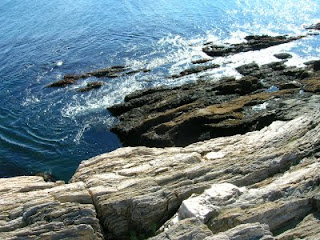 This is a very pleasant day trip as you can go all the way to Lands End on the Harpswell Islands Rd, cut across to the Harpswell Neck Rd and/or explore Cundy's Harbor all in the same day. There are beautiful photo ops all along these roads (be sure you pull off at the pull off areas and not in someone's driveway!) I would suggest bringing binoculars along as there are some interesting vistas waaay out. (There's one of those 25 cent viewing stations at Land's End!) Also, there were lots of pelagic birds bobbing around, so bring your birding guide as well.

After our walk on the Giant's Stairs/McIntosh Lot Preserve Trail, we headed to Lands End. There's a neat little gift shop at the end of the Harpswell Islands Rd (Rt 24). They had just about anything you might want and some things you never knew you needed (glass bottles flattened, but with the logos intact, that can be used for serving trays). 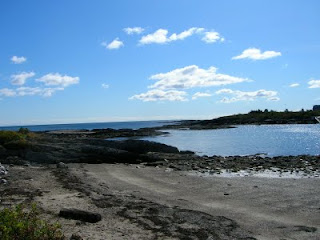 On our way back, we stopped at the Giant's Stairs Seafood Grille. It's a very unassuming joint but it was almost full when we arrived. In the summer there is outdoor seating as well as inside. We chose inside as it was a bit of a blustery day today. Rock had the clam roll with cole slaw and an iced tea and I had the BLT with onion rings and a chocolate milk. The service was fast & friendly and it was almost entirely locals the whole time we were there.

We pulled in here and there to take pix of different harbors, coves and bays, like this one...Mackerel Cove, where you can see the lobster boats home again at the end of the day. 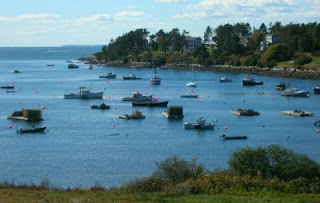 Of course, I couldn't forget a shot of the Cribstone Bridge just as you come from Orr's Island to Bailey Island. The bridge is under repair (10/09), so you get a much better view of it when you're driving by on the temporary bridge. This photo was taken from the parking lot at Cook's Lobster House. Cook's is located on a working wharf on Bailey Island (turn right onto Garrison Cove Rd just after the bridge), so a quick hop out to take the photo and back in the car was the plan. Casco Bay Cruises has a cruise out to Bailey Island during the summer. 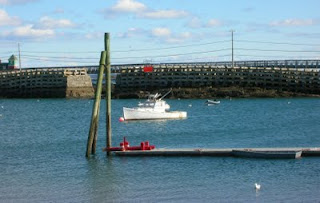 Another day we'll head down to Cundy's Harbor and see the sights there as well. Round trip to The Giant's Stairs, Land's End and Cook's Lobster House was about 60 miles. Side trips to Harpswell Neck & Cundy's Harbor would not add a lot more mileage to the day. You could plan anywhere from 2-4 hours for the whole trip, including lunch or dinner. The foliage was terrific and there was not a mosquito in sight! Lots of homes had beautiful purple asters and pink tree hydrangeas. There was something for the eye to feast on at every turn.

Love your post. Bailey Island is a rare collection of so much Maine.I will link you Blog and Website to our Hotel, Inn and Campground Blog links at:www.cookslobsterhouse2.wordpress.com so more people might be able to find you and you blog. Thanks for the tour.

Thanks for the link and the comments. We had a great time out there and will be trying other trails later on in the year.

Our guests yesterday had dinner at Cook's after they walked the trail. (I was excited about it and was telling everyone!)