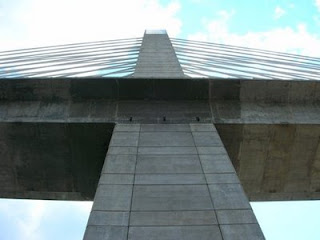 The observatory is 42 stories (447 feet) tall and is reached by an elevator. (Interesting that the elevator goes up almost 450' but only has buttons for 2 floors!) Admission to the observatory includes admission to Fort Knox, State Historic Site.

We had terrific blue skies and 'hundred mile views' from the observatory deck. Fair warning, when the elevator doors open at the top, you are about 3' from the glass wall looking straight out to the ocean. It is amazing! On exiting the elevator, you walk around to the side and up a short flight of stairs to the first deck. Then up a second flight to the main observatory deck. (There is a second, smaller 'elevator' for wheelchair accessibility.) 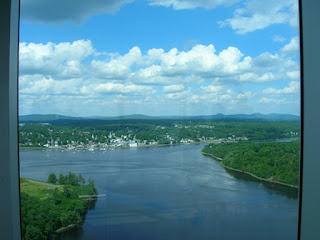 Once on the main deck, there is a compass rose in the floor to help orient N, S, E, W. Also, there are panels facing each direction which show what you are looking at. A definite help if you've never been to the area before.

We used them to identify this view through the window: the town of Prospect. At the edges of the photo, you can see the frames for the windows. In the left foreground of the photo is Fort Knox, the original Fort Knox, by the way, even though both forts were named for the same person, Major General Henry Knox. (If you are heading north on Rt 1 from Freeport, you pass his home, 'Montpelier,' in Thomaston. There is a museum there to visit.) 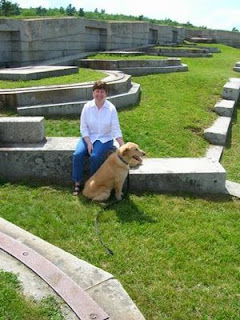 This is a view on the roof of the fort. Behind me are where the cannons were located. Below were the officers' quarters, men's quarters, powder magazine, etc. Below the parade grounds were cisterns and food storage. (Even today, at 80 degrees on the parade grounds, the lower storage areas were cool.)

The fort was built from granite quarried 5 miles away at Mt Waldo. It is the first and largest granite fort in Maine. If you've traveled the East Coast looking at forts, you'll notice the resemblance here to Fort Pulaski in GA and Fort Popham (near Popham Beach) as well as many others.

If your travels are taking you from White Cedar Inn to 'points northeast' don't just drive across the bridge! This is a definite 'must stop' on your journey!
Posted by Monica