A Reader's Guide to Maine

Are you a book junkie? Would a search of your suitcase reveal more books than clothing? Do your traveling companions despair when they see a bookstore anywhere nearby? Then this is the map and the vacation for you! Each pin shows the location of where the book took place, where the author lived or wrote or where the book's characters lived. For some 'state-wide' books, one location was chosen at random.

To get a real sense of how place impacts a writer, take a driving tour of some of the more out of the way locations! Seeing the fog roll in on a perfectly clear day or driving through the evergreen forests at dusk brings a deeper understanding of how place is as much a character as the people are. Even sitting quietly in a crowded diner in a big town will give you insight into how a community can shape an author's words.

For a self-guided tour covering more of the state and a lot of writers, check out the map below. The pins are placed as close to the locations as was possible. Some pins are located merely in the town to protect the author's privacy. If you have a favorite author who is missing, let me know, there's always room to add more!

The original idea for the map came from a Sunday Supplement in the Portland Press Herald. Additional books and authors were my idea. See the map description for full details!


View A Book Lover's Tour of Maine in a larger map

Although this map covers a lot of area and a lot of authors, there is one guided tour that you might want to try based on the state's most prolific author's works...The Tommyknockers Tour out of Bangor covers Stephen King's books and characters, as well as the author himself.
Posted by Monica No comments:

Oh my! I was wondering when and if these tours were going to get going again! Maine Foodie Tours in Portland takes you on a choice of delectable culinary tours around the Old Port area. Options include a walking tour of different food purveyors in the Old Port, a dessert tour that encompasses 5 different bakers & confectioners and the yet to be arranged beer tour (coming soon!).

This is the perfect opportunity to sample the wares of the Old Port, take a guided walking tour and scope out where to eat dinner that night.

For more information and to make reservations (highly recommended!) check out the Maine Foodie Tours website.

If you are staying here at White Cedar Inn you're only a 20 minute drive to Portland. Make a day of it and take the mail boat around the Bay or drive out to the many accessible lighthouses along Portland's shoreline.
Posted by Monica 2 comments:

A spectacular event in September- Maine Lighthouse Day will offer unprecedented access to many of the lighthouses that dot the Maine coast. Many of Maine's lighthouses are an easy drive and walk, some are accessible only via boat (many tour companies offer cruises to the lighthouses) and others can be seen from a variety of local beaches. An excellent selection of Maine's iconic symbol will be open for tours!

To view the list of lighthouses, accessibility info as well as a brief history of the lighthouses, visit the Maine Office of Tourism's special lighthouse page.

An integral part of Maine's seafaring history, the lighthouse is a cultural icon pointing the way home in the worst of weather to Maine's rocky coastline. The lighthouse is a beacon in the fog for the homeward bound sailor and a welcome symbol of family and friends awaiting their return. This is a fantastic opportunity you won't want to miss to see some of the most enduring and visible Maine icons!


Stay with us 2 nights for this weekend Sept 8-10, 2017 and receive a 6" chocolate lighthouse and a copy of Discovering Maine's Lighthouses and Harbors. Just mention this special when you make your reservation. (Cannot be combined with other packages or specials.) 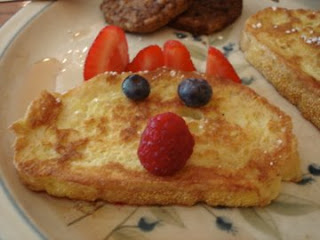 Here it is, almost five years that we've been innkeeping at White Cedar Inn! My how time flies. Any of you who have been coming here for all of that time (and before) know that we're always on the lookout for something we can update or make a little better for your stay.

We're also always on the lookout for new recipes for breakfast. With that in mind, Rock is undertaking a 'menu redo' which involves adding new items (omelets, for one) and taking away old items that he's just plain old tired of making.

Here's where you come in! If you have a favorite dish you've had here that you'd like to see stay on the menu, just post a comment below and tell us what it is. If you don't remember what it was called, just describe it.

And, if you have a favorite recipe you'd like us to try out, please post that as well.

I would have done a poll or survey but it's better if I give everyone a chance to write in what they like best! So, help Rock with the breakfast menu and save your favorite recipe from getting chopped!
Posted by Monica 2 comments:

Rebel to De Rigeur- 40 Year History of the T-Shirt 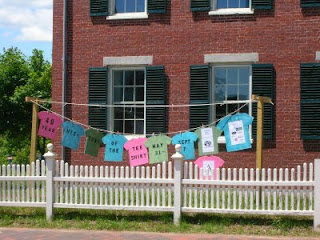 Everything you ever wanted to know about the history of the T-Shirt is happening this summer at the Freeport Historical Society. Now open on Saturdays. Stop in and see the humble beginnings of the t-shirt as it evolves from dad's undergarment to beat generation attire to anti war signpost to advertising medium. (Main Street, Freeport, Maine)
Posted by Monica No comments:

How do you know when you've been innkeeping for a long time? You get really excited about...NEW TOWELS!

In a blinding rain I drove to Wells today to pick up our new towels. We get them at the Cannon Outlet on Rt 1 just south of the Wells Auto Museum (same side of the road). On Tuesday I drove down to buy a few towels to 'test'. I brought them home, washed and dried them and then handed them out to the guests to do the 'touch test'. As far as I know, those 4 guests were stopping in at the outlet to buy the towels they tested!

Yesterday I called the warehouse and ordered 4 dozen of each towel size plus 2 dozen floor mats. The floor mats are 50% bamboo and they are the softest floor mat I've ever stepped on. (Yup, bought one for us, too!)

So, you know what we'll be doing for the next couple of days...washing and drying! I hope we can get everything changed out by Monday. We went with the Vista Spa model which is a large, thick, soft towel with good drying ability. Rock likes a towel that does the job it's supposed to do and looks good while doing it. (Hey, that sounds like a description of Rock himself!)

For those who are wondering what happens to all of the old towels, fear not...we take them to a homeless shelter for use either at the shelter or to give to the folks moving into their own new housing.

The driving today was miserable, I do have to say. I usually love the drive to Wells because I stop at Ogunquit Beach to go for a walk. Not today. Ugh. It was awful out there, simply driving rains on the interstate which had traffic going 40-45 MPH. So, given I missed my walk on the beach, I treated myself to a lobster roll at Day's on Rt 1 South, just across the border from Freeport in Yarmouth. Yum-o!

I think I'm going to blog about lobster roll sometime. It'll be tough doing the research, but someone has to do it!
Posted by Monica No comments:
Newer Posts Older Posts Home
Subscribe to: Posts (Atom)