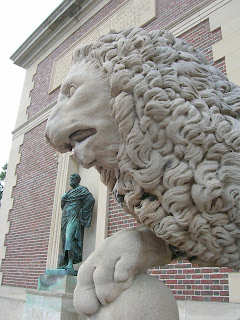 Headed up to Bowdoin College today to see the Edward Hopper exhibit. Easy drive from here and an excellent show. (Exhibit runs through Oct 16, 2011.)

Better still, with the Art Museum's interactive map, you can visit all of the sites where he painted during his vacations in Maine. This is an artist whose vision of Maine coincides with mine, which explains why I liked the exhibit! I loved his comment that all he wanted to do was paint sunlight on the sides of houses. Once you read that, the sunlight jumps out at you even through the darkening skies. Wandered around the campus a little and popped into the Peary MacMillan Arctic Museum (just across the quad from the Art Museum). There is an exhibit going on now of Canadian Inuit Art.

Photos taken by our guests on their vacation in Maine. Please enjoy, but do not copy! Check them out on our website and in the dining room on our e-frame!

Posted by Monica No comments: 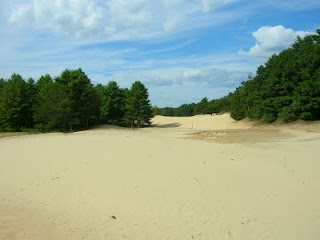 Desert of Maine in Freeport

Do you live someplace with a really interesting attraction that only tourists go to? It seems that I do. We've been here for seven years and I used to come here on vacation. And yet, I had never been to the Desert of Maine until Wednesday.

We had 3 of the grandkids here for a few hours and we decided to take them to the Desert. (Really, my mom suggested it. Every once in awhile I listen.)

There is a tram tour around the perimeter of the Desert, but you may also walk it if you prefer. There are several trails that go off into the wooded area so be sure to pick up a trail map at the desk in the gift shop, where you also get your tickets.

First stop was the butterfly 'zoo'.

Interactive signs are placed around the trails to show different parts of the history and to highlight where various parts of the old farm have disappeared under the sand.

Our tour guide explained the desert originally formed during the last period of glaciation in Maine but was uncovered due to poor farming practices in the late 1800's. What I've heard in other places is that when the owner of the farm threw over his older wife for a younger model, the first wife cursed the farm and the desert slowly revealed itself from the spot on which she stood.

Given this is New England and stories like this abound (The House of the Seven Gables is one such tale) I'm inclined to believe the curse. You can make your own decision on that one!

The tour guide asked where all of us were from and a fairly large percent of the guests that day were from nearby in Maine. And we all had a guest from 'away' in tow!

From here it's a short drive to the Desert (about 4 miles). Wear sunscreen and a hat and bring your sunglasses so you can enjoy the day. It was 15 degrees warmer on the mica-flecked desert than it was in the parking lot.

The kids tried the huge 'View Master' shown below. Just for fun, they tried looking at 2 pictures at the same time. They said it was 'interesting'.