We had some damage back in December from the ice storm. The large red maple at the corner of the driveway sustained major damage to one large limb, causing it to split in two, although it did not break completely off. As winter progressed and more water got into the split, it got larger and larger and longer and longer. Last week we had the limb removed by Scott Gallant. He also did some work on another tree that was starting to lean a bit.

So, safe in your armchair, have a look at Scott 'hanging around' at our house... 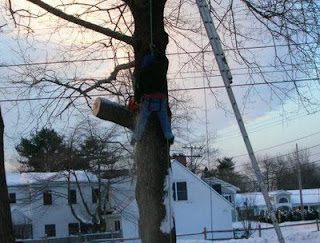 Notice how he blends in chameleon-like as he buzzes his way around that pesky branch! You can really only see his denim-clad legs, if you look closely enough!

They started in working at 7 AM (be glad you weren't here trying to sleep in!) and were all done with the cutting and picking up by 9 AM. That day the temp was around 25 in the early morning and below 0 by dinner time. Brrrr! Scott said that is one of the difficulties in working in the winter...the cold! 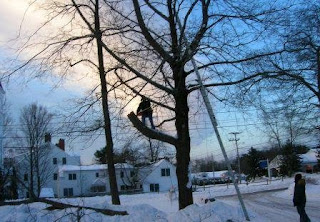 It is totally amazing to watch someone take a tree apart limb by limb. You can see the very end of the limb is already on the ground as he works his way closer to the trunk. Until we get used to it, the tree is going to look very 'naked'. That one branch, as you may recall, was substantial. Less overhang in the parking area this year. 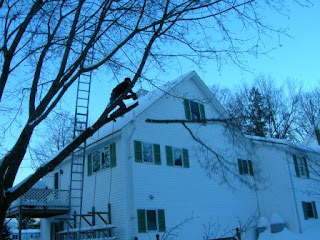 This is in the back of the house, where most of you never see. Scott is not standing on the roof, he's standing on the limb he is cutting. This is the 'action' shot as you can see the branch is falling at this point. For anyone who has ever wondered, those windows you see on the corner belong to our kitchen. Yes, we have our own!
Posted by Monica